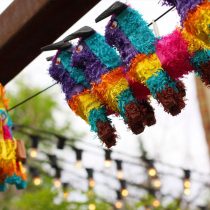 The history of the piñata

A piñata is a container made of papier-mâché, which is decorated and filled with small toys, chocolates and candies. Nowadays, it is used at the parties as a part of the celebration, and kids love this fun activity and the small presents it gives them when they manage to break the piñata. However, the history of piñata is long and it reveals many interesting facts beyond the playing of a game.

Probably, piñatas have originated in China where the paper originated too. Marco Polo discovered the Chinese fashioning balloons of colourful paper in the figure of a cow and filled with seeds, which greeted the New Year. The mandarins knocked the figure hard with sticks, and the seeds spilled out. As part of the ritual, the paper was then burned, and people gathered its ashes for good luck.

Marco Polo brought the idea to Italy, and the Italians gave it the name pignatta, which means fragile pot. From Italy, this custom spread to Spain and was associated with the celebration of Lent. The first Sunday in Lent, there was a fiesta, which was called the Dance of the Piñata. The Spanish people used a clay container which was decorated and covered with colourful paper.

At the beginning of the 16th century, the Spanish missionaries brought the custom to New Spain in America where they discovered that there was a similar tradition. To honour the Aztec God of War, a decorated and filled with tiny treasures pot was broken in his temple at the feet of the God’s statue, offering the God these treasures. Catholic missionaries used this tradition to teach the Christian religion. The traditional Mexican piñata had a spherical shape with seven conical points, which symbolised the seven deadly sins. Inside the piñata, there were sweets and treats, which symbolised the pleasure of life and the hope of reward. The missionary, who knocked the piñata, represented the faith, which can defeat evil.

This symbol became traditional at Christmas, and then, it was associated with the presents of the kids. Today, piñatas can be found in all shapes and sizes with characters known to most children. They are used at the kids’ parties, but sometimes, they can find their place at adults’ parties for fun or to satirise politicians. Making piñata for children’s parties is a major industry since the custom continues to spread around the world.