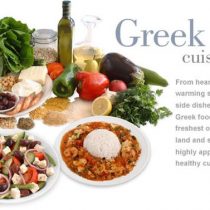 What makes every country unique is not only its history, language and people, but also its gastronomy. The culinary tradition of every nation is a very important part of its culture and a piece of its people’s souls.

Greece has a gastronomic heritage which began thousands years ago. We are going to present you a small selection of the must delicacies you must have so to taste real Greece.

This food might seem gross to some of you, but it is one of the most traditional Greek dishes. It is made of lamb or goat intestines wrapped around seasoned offal, including sweetbreads, hearts, lungs, or kidneys. It is roasted on a spit,and it is usually a starter before the consumption of roasted lamb, especially on Easter day.

It is a type of salad, very popular in Crete. It is made of rusks (hard bread, triple baked), grinded tomato, feta, capers, olive oil.

The consumption of lamb in Greece has its origins in the antiquity. This version is made in many Greek islands but also in mountaineer areas. It is prepared in a wood-fired oven and tastes heavenly.

The ultimate dish of Greek summer. Made of vegetables stuffed with rice and herbs. Better consumed cold after a long day on the beach, with lots of fresh bread, feta and olive oil.

Phillo dough has its origins also in antiquity but it took its pie form in Epirus where nomad shepherds had to carry all the time their food, so they invented an edible packaging. Spinach pie with feta is an old time classic selection, a typically peasants food, which every Greek family could afford.

A variety of appetizers which were invented by the housewives of the Aegean islands due to the lack of ingredients, since most of the Aegean islands are infertilite. The different types of fried balls are tomato ,zucchini and chickpea balls except the main ingredient they usually contain eggs, flour, onion, feta, herbs (dill, oregano, spearmint, parsley etc.). They are usually accompanied with yogurt (another thing to taste is Greece) or tzatziki (yogurt, cucumber, garlic).